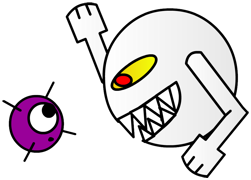 When Technophobe joined ABS as Flash game developer, he submitted not one, but five games, and one of these later got him some paying work.

Technophobe has also been important to ABS because the Flash tutorials he created has inspired many others to animate and program. His Moving Eyes tutorial resulted in a hit game by a new artist.