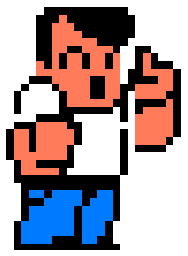 Back in the early 2000s, Tom Mannino of Hollywood, California going by the online handle Evilzug released animated music videos of late 1990s music represented with classic 1980s Nintendo video game characters. This mish-mash became an Internet phenomenon for all nostagiac children of the 1980s stuck in a post-90s era. Instead of the usual Super Mario and Zelda sprites so overused in Flash animations, Evilzug appealed to players of more obscure games such as A Boy and his Blob, Barbie and River City Ransom. As someone who has passed A Boy and his Blob, I felt a deep connection with Evilzug and frequented his old blog at evilzug.com back in the day.