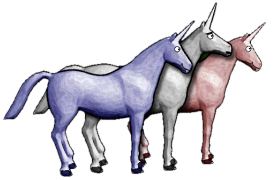 In 2005 animator and musician Jason Steele released Charlie the Unicorn online. A single animation about a grumpy unicorn being bothered by two upbeat unicorns to go on an adventure to Candy Mountain.

In April 2008 Jason followed up Charlie the Unicorn with a sequel on YouTube, and then again one year later. Each episode contains a musical number that you can download as a free MP3.