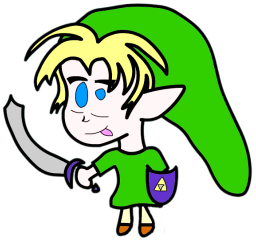 Animations by Ryoshenron (John Deiman) have been part of Albino Blacksheep culture since 2005.

Ryoshenron's works are an evolving style with large differences in both drawing and humour from the first episode of a series to the last, but almost always ending in a random explosion. His unique style comes from a wide range of parody attempts. Ryoshenron parodies a combination of Japanese anime, superhero cartoons, Pokémon, FPS gaming, RPG gaming and retro console games.

He's best known for his Boy and Robot series of Web animations, but recently got involved in more time-consuming Flash game development producing both side-scrollers and RPG games.