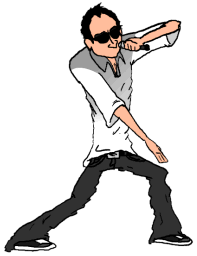 Rappy McRapperson was born a rapper and will die a rapper, and then will continue to rap from the Heavens above. He originally entertained as a television host in 2000 with a public access show called Lateness in Seattle, Washington, not too far from his hometown of Lake Hills, Washington. During his time as a TV host, he recorded rap songs and has since released full rap albums.

Currently, Rappy has teamed up with Taylor Bortner, a Flash animator, and together they have been submitting MP3s and animated music videos to Albino Blacksheep.