Yotam Perel is an animator on Albino Blacksheep under the name LazyBoy. He's from Tel-Aviv, Israel, and animates to his own and others' comedy skits and songs, including popular radio station sketches. He's best known in some circles for his Nameless 6 series, and in other circles for Bob and the Apple.

Some of his work is considered a little offensive. 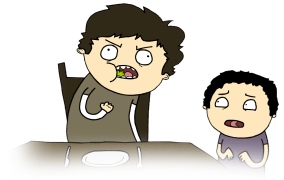