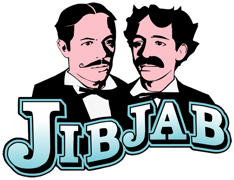 The Venice, California studio known as JibJab was started by the Spiridellis brothers, Evan and Gregg, in 1999. They were pretty well-known for their political animations in the Flash community, but their ambitions were greater. They took animation style to a whole other level of intricate detail and got the media attention they required by animating their hit, This Land released July 2004. JibJab became the large media company the Spiridellis brothers desired with some of the best e-card technology.

JibJab (well, one of the brothers, Evan, I think) has thanked Albino Blacksheep for sending them "loads of traffic" in 2004. Those were the days.