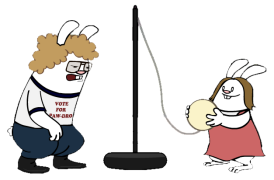 In 2002, Jennifer Shiman submitted her Amy's Diary animation to Albino Blacksheep. A couple years later Jennifer contacted ABS again to submit a 30-second cartoon. A parody of The Exorcist, but re-enacted with bunnies, and became very popular here. Jennifer continued this 30-second bunny movie gimmick for months to come. Every character was a bunny, even inanimate objects and other animals.

It wasn't long until the big studios noticed the 30-second bunnies and Starz Entertainment commissioned Jennifer to premiere these on television as Starz Bunnies. A true success story of a Flash animator.

Movies in 30 Seconds re-enacted by Bunnies