Eddsworld is the world of the United Kingdom's Edd Gould and his on-and-off close friends Matt, Tom and Tord. Since 2004 Edd has been portraying himself in animation wearing his trademark green-hooded sweatshirt and loving Coca-Cola®.

Eddsworld's inclusion to Albino Blacksheep has been almost two years in the making, although Edd had already established himself as a popular animator long before via social networks and a loyal fanbase. 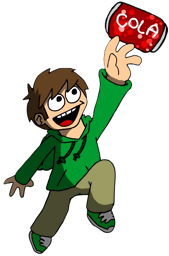